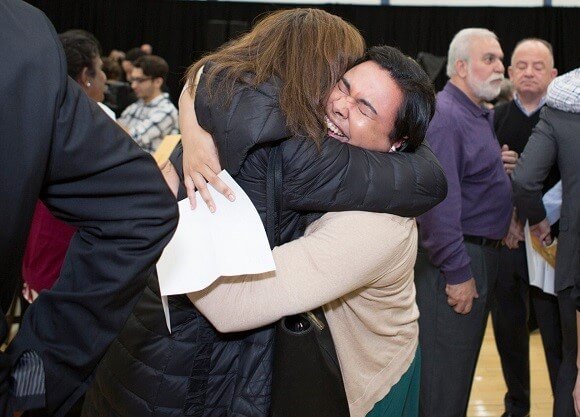 Excitement rippled through Burt Kahn Court on March 17 as fourth-year students in our Frank H. Netter MD School of Medicine waited with their families to learn their fates at Match Day, when students nationwide find out where they will be doing their residencies, the next phase in their medical education.

The answers were safely hidden in gold envelopes placed in ceremonial “pots of gold” — a nod to the fact that this important day coincided with St. Patrick’s Day.

“Today, you take your first step into the future,” said Senior Associate Dean Alan Otsuki, MD, who gave an overview of where the students would be going. All 59 members of the medical school’s inaugural class will enter residency programs, which vary from three to seven years depending on the specialty.

After brief remarks from several administrators, glasses of champagne were distributed and the countdown to noon commenced. That’s the time when fourth-year students at LCME-accredited medical schools nationwide all open their envelopes in unison.

Nicole Gordon, who is pursuing a career in family medicine, was so nervous that she couldn’t bring herself to open her envelope; instead, her husband, David Bernstein, did the honors. The result? UC Davis.

“I’m from California and this was definitely in my top three,” she exclaimed. “I’m very happy.”

Early in their fourth year, medical students apply and interview for positions in residency programs, which vary from three to seven years, depending on the specialty. Students submit a rank-order list to a centralized computer matching service. Netter students are headed to a variety of prestigious programs, including those located at Yale, Brown, Johns Hopkins, Dartmouth, University of California San Francisco and the University of North Carolina. Twelve percent of the graduating students are entering family medicine, which exceeds the national average of 7 percent and complements the mission of Quinnipiac’s medical school.

“We, as teachers, live for the times we see our students’ success and the realization of what they’ve dreamed of,” said Norbert Herzog, professor of medical sciences.

James Fraser said that he was nervous, “but very ready to open up my envelope.” He was ecstatic to see one of his top choices: general surgery at Thomas Jefferson University Hospital in Philadelphia. “Looking back at all the hard work, I really loved medical school, but I am ready for the next step,” he said.

An emotional Erin White was thrilled to land her top choice for general surgery: Yale University. Originally from California, she loves living on the East Coast and couldn’t be happier with her medical school education. “It was wonderful here; I loved the faculty when I visited the school — and they totally delivered. I appreciate all the support we got.”

Alyson Cunningham and Venkat Subramanyam, began dating during their first year of medical school. They got engaged in January and are getting married in Newport, Rhode Island, in June. But a big question mark loomed over their future: would they be together for the first years of married life or living on opposite coasts?

“We knew that there was the possibility that we’d be far apart, but we were determined to make the best of it,” said Ben. Fate and Cupid smiled on the pair: both are headed to the University of Connecticut; Cunningham for general surgery, Subramanyam for emergency medicine.

Matthew Abrishamian found out he’ll be headed to Philadelphia for an emergency medicine residency at Drexel University.

“Wow, this is the end of weeks and weeks of nerves,” said Abrishamian. “I’m a big city guy, so I’m happy about going to Philly. I put down roots here and I made a lot more friends than I expected to, so I will definitely miss it here. Med school was tough, but rewarding. It was all well worth it. I’m ready.”