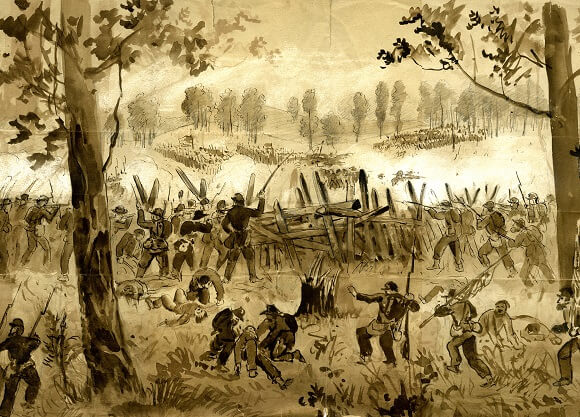 The exhibition features original drawings by Joseph Becker and other 19th-century artists who worked as artist-reporters for Frank Leslie’s, “Illustrated Weekly,” the era’s leading illustrated periodical. The artists covered events such as the Civil War, the building of the transcontinental railroad and the laying of the transatlantic cable. The collection of drawings, and exhibition, is co-directed by Judith Bookbinder and Sheila Gallagher.

“This is a great opportunity for us to not only talk about the Irish Famine story, but to look forward another 20 years in terms of what Irish immigrants were doing after they got to America,” said Ryan Mahoney, executive director of the museum. “We know they left Ireland and were looking for a better life. This exhibition, while not a comprehensive look into the total Irish experience, helps tells the story about them building America in the 19th century through a unique lens.”

To accompany the approximately 85 pieces from the Becker Collection, the museum will also create a companion exhibition on the work of Irish American artist John Mulvany. Born in County Meath, Ireland, Mulvany came to New York in 1851 during the midst of Ireland’s Great Hunger. Mulvany worked as a sketch artist during the Civil War, and was praised for the realism in his pieces. He would go on to become a prolific artist of the American West, including his 1876 award-winning painting, “Preliminary Trial of a Horsethief,” which will be on exhibit at the museum.

Mahoney said “Making America: The Irish in the Civil War Era” will be on display until Oct. 28 and is sponsored by TD Bank. The new exhibitions will offer unique educational opportunities after Quinnipiac sent a portion of its acclaimed art collection from Ireland’s Great Hunger Museum to Ireland for a major traveling exhibition entitled, “Coming Home: Art and the Great Hunger.”

“Coming Home: Art and the Great Hunger” will be on display at Dublin Castle through June 30, continue to West Cork Arts Center in Skibbereen, Ireland from July 20 through October 13, and then culminate at An tSeanneaglais in Derry, Northern Ireland from January 18 through March 16, 2019.