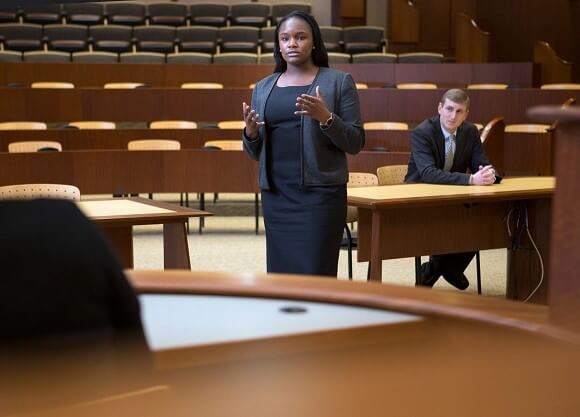 Twenty-two teams representing a dozen colleges and universities competed — including Yale, Harvard, Northeastern, Maine and Suffolk Law School. Each round moved at the speed of real litigation, forcing teams to plan strategies and conduct all elements of a criminal trial in real time.

“Everything is so fast-paced,” said Briana Williams, a second-year law student. “You’re literally running from courtroom to courtroom and then waiting to see if you’ve advanced or not.”

Williams, along with teammates Joseph Boccia, a third-year law student, and Michael Rapiejko, a second-year law student, posted a 4-1 record during competition. After rebounding from an early loss to Suffolk, Williams and Boccia successfully led Quinnipiac in the semifinals, defeating their counterparts from Yale. The duo went on to best Harvard in the finals to wrap up the action-packed weekend.

Boccia, who also serves as creative director for Quinnipiac’s Mock Trial Society, took the best overall advocate award for his high level of preparation and performance in the final round against Harvard.

“For me, it was just another shared team award,” Boccia said. “Briana pretty much dragged me across the finish line in the semis. I felt like I owed it to her in the final to put forth my best effort.”

Boccia, Williams and Rapiejko also credit their coaches, Sean McGuiness JD ’09 and Ryan O’Neil JD ‘08 for working with them on various verbal and non-verbal tools, helping to enhance their advocacy skills and persuasiveness.

“We prepared for the competition on nights and weekends for approximately five weeks leading up to it,” McGuiness said. “We spent countless hours honing their openings, closings and examinations.”

McGuiness, who works in the New Haven State’s Attorney’s Office, has taught the mock trial and advanced mock trial classes at Quinnipiac since 2015. Both he and O’Neil were members of the Mock Trial Society as students.

O’Neil, now a partner at the Law Offices of Mark Sherman, LLC in Stamford, recalls the high praise the Quinnipiac team earned from some of the top lawyers and judges in New England.

“They were regularly told that their performance was better than the vast majority of practicing lawyers they see in court on a regular basis,” he said.

Following their victory, Boccia, Williams and Rapiejko will join 27 other teams in Fort Worth, Texas later this month to compete for the national championship.

“We can’t wait to get to Texas to represent Quinnipiac,” Williams said. “I am so excited to see how far we can take this.”