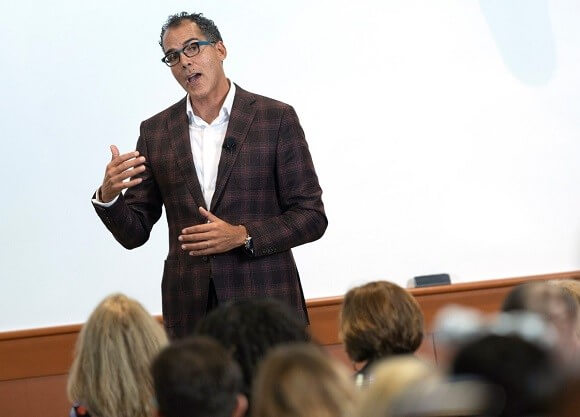 When James Forman, Jr. was a public defender in Washington, D.C., he petitioned a judge to waive the years of incarceration that his 15-year-old African American client, "Brandon," faced based on his lifetime of hardships. Forman said he was floored when the judge, also an African American, cited his own hardships during Jim Crow and the civil rights movement as rationalization for the harsh sentence he ordered.

“The judge had invoked the same figures and history that motivated me to become a public defender, but he had somehow flipped it on its head and used it as a justification for why he needed to lock up 'Brandon,' ” explained the law professor and Pulitzer prize-winning author.

“It inspired me to begin wrestling with the question of what has happened in this country over the past 50 years, such that even in a majority black jurisdiction with some control over our local government and of our criminal laws, we were doing the same thing and making the same policy choices that the rest of the country was making.”

That question inspired Forman’s 2018 Pulitzer prize-winning book “Locking Up Our Own: Crime and Punishment in Black America.”

Forman said he was honored when the Occupational Therapy Department in the School of Health Sciences invited him to speak about his book at Quinnipiac. With its focus on mass incarceration, the author is used to getting interest from law students, but not often the type of crowd that assembled for him in the St. Vincent’s Medical Center Auditorium at our Center for Medicine, Nursing and Health Sciences.

“One of the great things about the conversation that’s happening on this campus, which is really unique for a university, is the way it’s crossing disciplines,” said Forman. “I know that this isn’t happening every place this needs to happen.”

After Forman finished speaking, students in the audience wanted to know how they can be part of the solution.

“One of the reasons why we have the largest prison system in the world is that we have demonized and otherized people and we have created this scary conception of the criminal,” explained Forman.

“In whatever way, shape or form you choose, get yourself in proximity to people who are incarcerated or formerly incarcerated,” he encouraged. “It’s the most powerful thing we can do to break down barriers and change attitudes.”