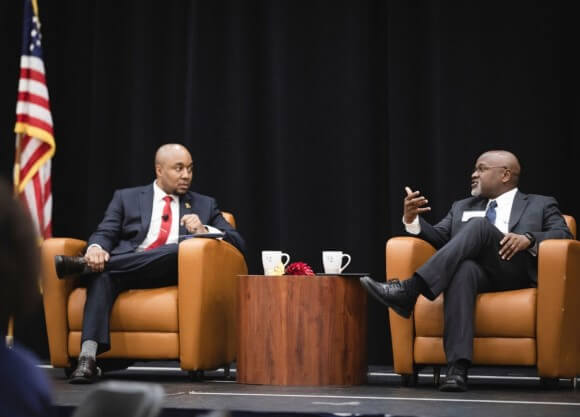 Long before Richard Robinson was confirmed as the first Black chief justice of the Connecticut Supreme Court, he was a little boy riding 13 hours in the back seat of a car.

Summer didn’t just mark school recess on the west side of Stamford in the 1960s. It also marked a trip to his grandfather’s farm in South Carolina and a taste of a different world, a place where “boy” was a pejorative and a family’s response unlocked a future.

“When you got to the Mason-Dixon line … things changed,” Robinson told nearly 200 people Tuesday night at Quinnipiac during a Black History Month dinner honoring Legacies of Black Excellence.

These days, Robinson is blazing a new trail as the chief justice of Connecticut’s highest court, the journey of a lifetime he so eloquently and sometimes bluntly shared.

For President Judy Olian, Robinson represented a role model for all, a person whose courage and commitment to inclusive excellence shines in his judicial leadership.

“It isn’t enough to go by the numbers to merely have a presence of people different from oneself to be a stronger community, though that’s an important first step,” Olian explained. “It’s when we respect and learn from and empathize with and are humbled by and join hands with others who might be different. That’s when we truly become inclusive.”

Sous chef Eric Jackson created the menu of 11 traditional dishes—appetizers, entrees and desserts—selected from traditional recipes prepared at the National Museum of African American History and Culture in Washington, D.C.

“I went through the recipe book, and the first thing that I thought about was Thanksgiving dinner,” Jackson said. “I made most of these recipes a few months ago for my own family.”

The Black History Month feast was three days in the making, Jackson explained. On Sunday, he and members of his team prepared the black-eyed peas for the kale salad, seasoned the pork butt for the pulled pork, made the ham hock broth for the collard greens and marinated the chicken for the jerk chicken.

On Monday, other members of Jackson’s team prepped the corn bread, mixed berry cobbler, sweet potato pie and the macaroni and cheese. On Tuesday, it all came together for a delicious and authentic dinner.

“I’m just excited for everybody to taste the food my team put together,” Jackson said before the event. “I hope everybody enjoys at least one thing on the menu or tries something they’ve never had before.”

Around the room, 10 African Americans were honored on posters for their contributions to medicine, science, higher education, entrepreneurship, and the culinary and performing arts.

“We aim to incorporate inclusive excellence in everything we do to create a globally engaged, culturally rich and highly collaborative campus,” said Don C. Sawyer III, vice president for equity and inclusion.

Robinson agreed. In fact, he took matters a step further.