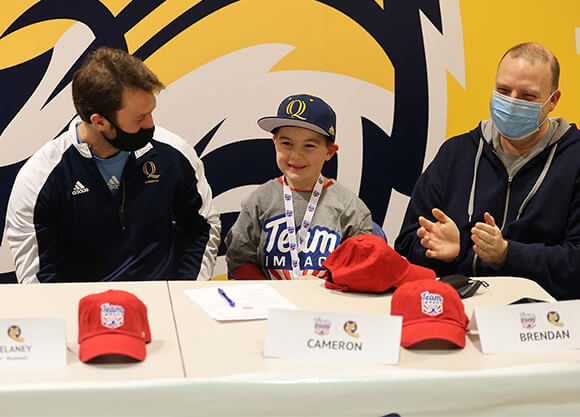 For many children with serious illnesses and disabilities, participating in a team setting can be an extreme challenge due to health barriers. Thanks to national nonprofit Team IMPACT, that is changing — one school at a time.

Team IMPACT describes the program as a “two-year therapeutic program [which] complements [the children’s] medical treatments, [and helps] develop relationships and skills that help them complete the full circle of healing.”

“Michael stood with the team on the ice every game for the national anthem and would exude excitement each and every time. He loved coming to practices and then engaging with the team after practice and being pushed in his wheelchair on the ice was his favorite,” said Lori Onofrio, men’s and women’s ice hockey administrative assistant.

Katie DePaolo, marketing manager at Team IMPACT, explained how the Team IMPACT teammate themselves learn an immense amount from the experience.

“This gives our student-athletes a perspective that they wouldn’t have if this program didn’t exist. They get an opportunity to really be one-on-one with families and pediatric patients that could benefit from the team comradery that they’re able to provide,” Hardee said.

Although Torello is no longer physically part of the team, the athletes show the deep relationship they had with him through even the smallest of movements.

“Michael’s teammates still honor him at every home game. At the end of the games, they each skate to the area where Michael sat every game and tap their sticks to the glass where a sticker with Michael’s number was placed,” Onofrio said.

After the men’s ice hockey team advanced to the regional finals this year, head coach Rand Pecknold posted a message on Twitter recalling how much he and the team missed Torello.

“Thinking of our friend Michael Torello tonight after this huge win. We miss you Michael,” Pecknold tweeted.

Past the hockey team, other student-athletes are creating lifelong bonds with Team IMPACT teammates. Most recently, the men’s baseball team signed on 6-year-old Cameron (Cam) Wilson.

“We are elated to have him be a part of our team and welcome him to being a part of the Bobcat family. When our players heard of Cam joining our club, they immediately knew he would be a great fit and couldn’t wait to make it official,” Men’s Baseball Assistant Coach Patrick Egan said.

The team quickly became close with Cam and have welcomed him into the Bobcat family.

“As we begin play back up in the northeast, Cam will attend practice and games and be on the field and dugout as much as we can have him around,” Egan said. “Cam’s story is about strength, perseverance, determination and appreciation, and all of those things are important attributes we have learned from Cam. He is a resilient kid and those are just a few of the reasons that we look up to him.”

Through Team IMPACT, the lives of children and student athletes across the nation are being changed for the better.

“It goes way further than the sports themselves,” DePaolo said.