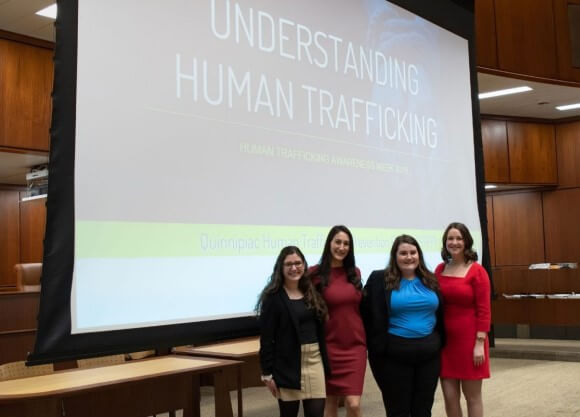 Working for the Quinnipiac School of Law’s Human Trafficking Prevention Project (HTPP) has taught Cynthia Lill, JD '21, that anyone, including children, can potentially be at risk.

Since 2017, the human trafficking prevention team has trained workers in various industries throughout Connecticut — including hospitality and health care — to identify and respond to instances of human trafficking. Such training will be offered during the law school’s annual Human Trafficking Prevention Awareness Week, which will take place on our North Haven Campus later this month.

As the team’s co-training chair, it is Lill’s job to plan and deliver training to organizations that need it most. After learning that every county in Connecticut has experienced cases of child human trafficking — there were 1,057 referrals from 2008-18 alone — and that 67% of children were living at home with their parents at the time of their victimization, Lill knew she had to act.

“If kids are living at home with their parents, they are likely also attending school,” Lill said. “I felt that we needed to get into schools to educate teachers about what is going on.”

“DCF needs people to speak with passion and empathy about the issue and convey its importance,” said Hayre, faculty adviser to, and co-founder of HTPP.

“Every child has a vulnerability, and these traffickers know exactly how to exploit them,” Lill said.

In November, Lill and her colleagues spoke to students in a human rights class at Pomperaug High School in Southbury, Connecticut. They opened students’ eyes to the prevalence of human trafficking, as well as the predatory tactics traffickers employ, such as luring targets through social media and dating apps. They also trained school nurses in Bridgeport and will conduct training with teachers at Jonathan Law High School in Milford, Connecticut in February.

“I don’t know that we’d be in schools if it weren’t for Cynthia,” Hayre said. “She’s the perfect advocate for this and takes her passion for the issue everywhere she goes.”

Lill’s commitment to arming individuals with the knowledge to act against human trafficking wasn’t restricted to schools. In November, she and three other law students presented “An Introduction to Human Trafficking for the Legal Community” to the Office of the Public Defender in Bridgeport, Connecticut. Participants included the former Connecticut Supreme Court justice and commissioner of DCF.

“Many of them realized that they’d seen victims come through before, but just didn’t know what to look for," Hayre said.

The presentation keyed in on what she called the “invisible chains” that prevent victims from being able to break free of their traffickers. Traffickers often use narcotics to keep them willing and pliable, and intentionally expose them to criminal liability by getting them to shoplift or deal drugs. Victims may be reticent to reveal their circumstances to their attorneys.

“They are more likely to be charged with a crime than their trafficker or buyer,” Lill said. “Often, public defenders don’t even know that they are defending a trafficking victim in the first place.”

Lill hopes every public defender who HTPP visits will develop training methods unique to their office, as well as the town and demographics they serve. “What works for one might not work for another, so our goal is to give each one the tools to create their own protocols for spotting victims,” Lill said.

Lill is also working alongside Hayre and other members of Quinnipiac Law’s Civil Justice Clinic on a legislative proposal that would allow victims of human trafficking in Connecticut to request that any other conviction–from prostitution to drug crimes, breach of peace and larceny–be set aside if the victim can show the conviction was as a result of their being a victim of trafficking.

Lill knows there is a lot of work ahead for HTPP. Stemming one of the most egregious human rights abuses of our age is daunting, but it’s a fight she’s committed to continuing, one round at a time.

“I came to Quinnipiac Law specifically for the Human Trafficking Prevention Project,” Lill said. “This gets me out of the books and into the field, where I can make a difference.”