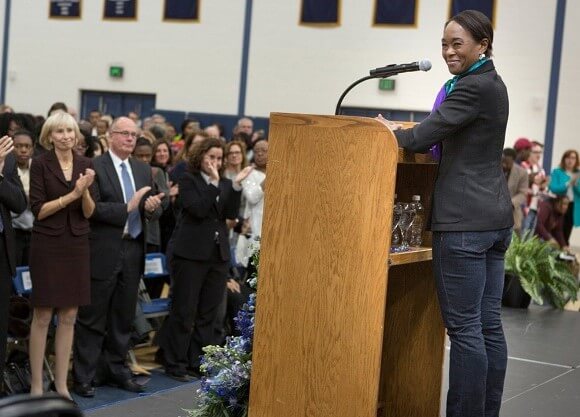 The women showcased in Margot Lee Shetterly's "Hidden Figures" did more than drive America forward and help win the space race — they propelled women, African Americans and science in general to new heights.

Set against the rich backdrop of World War II, the Space Race, the Civil Rights Era and the burgeoning fight for gender equality, the conversation brought to life the stories of Dorothy Vaughan, Mary Jackson, Katherine Johnson, and Christine Darden, who worked as mathematicians at NASA during the golden age of space travel.

“Equality is what these women worked so hard for,” she said prior to taking questions and signing several hundred books. “Only they didn’t march with their feet, but with their scientific advancements.”

The women worked diligently — and often in the shadows — to rise from simply “human computers” to key players in the segregated space program.

Teaching math at segregated schools in the South, they were called into service during the WWII labor shortages. Suddenly, these overlooked math whizzes had jobs worthy of their skills at the Langley Memorial Aeronautical Laboratory, in Hampton, Virginia. Even as Jim Crow laws segregated them from their white counterparts, the women of this all-black “West Computing” group helped America achieve a decisive victory over the Soviet Union in the Cold War. They were part of a group of hundreds of black and white women who, over the decades, contributed to some of NASA’s greatest successes.

“Once they were in these positions, they took every opportunity to exceed expectations,” she said.

Their efforts benefited the following generations of individuals who looked like them, Shetterly told students, alumni, faculty, staff and members of the public.