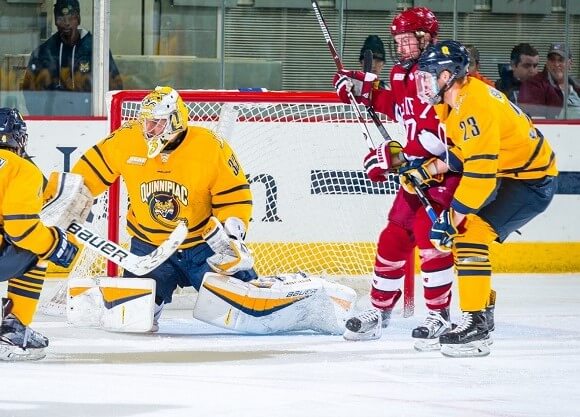 Defending the net against some of the fastest skaters and top shooters in college hockey isn’t the most difficult aspect of Bobcats goalie Chris Truehl’s job. It’s the periods of inactivity, the moments when the action is on the other side of the blue line — that are the hardest for the junior goaltender, one of three on the team.

“You’ll see me skating around a lot, stretching my legs, moving my arms,” Truehl said. “If I start to feel my body stiffen, or my skin begin to tighten and feel uncomfortable, I absolutely have to.”

While many people claim an adversarial relationship with the cold, Truehl’s is particularly unique. He suffers from a condition called cold urticarial — or cold hives. He is allergic to ice and highly sensitive to very cold temperatures.

“I know. There is absolutely no shortage of irony there,” he joked.

The Bobcats take on ECAC Hockey rival Yale on Friday at 7 p.m., in what’s come to be called the Battle of Whitney Avenue. The Bobcats are fresh off a 7-3 victory over RPI last weekend and have a 17-13-2 overall record (11-8-1 in ECAC Hockey) going into the Yale game. You can watch it live on SNY-TV. Saturday, the Bobcats will wrap up their regular season with a game vs. Brown.

Truehl became aware of his condition in 2013, while playing hockey as a member of the U.S. Air Force. Following an intense practice, the young goalie stepped into an ice bath to rejuvenate. After several minutes, he started to feel discomfort and noticed red welts forming on his skin. The welts spread to his lower body, growing darker and more painful. At first, the coaches and medical staff thought he’d been bitten by something.

After some tests, it became clear the painful hives covering Truehl’s body were an allergic response to the ice-cold water. The news was baffling as Truehl, a Wisconsin native, had no family history of cold urticaria and had grown up embracing the outdoors, tough Midwestern winters and winter sports.

“Hockey, skiing, snowboarding; I was involved in pretty much every major cold-weather sport and pastime you can think of,” he said.

Truehl attributed his condition to events that occurred a year prior. As part of his Air Force training, he’d had to complete a survival exercise with four of his peers in the woods of Colorado. It was June, and they were prepared for dry, 90-degree heat.

An unexpected weather system, however, blindsided Truehl and his team. For five days, they plodded through rain and hail, the temperature dipping at times below 40 degrees. By the end of the exercise, frostbite covered nearly 40 percent of Truehl’s skin. The U.S. Air Force physician who treated him told Truehl that while he would recover, he might experience certain side effects as a result of his exposure.

“I thought, ‘OK, maybe my skin will just be a bit more sensitive going forward.’”

The news was worse. The condition ended his military career, disqualifying him from all graded positions.

“It pretty much drove a stake right through every aspect of my future,” he said.

Having started more than 50 games in two years as a goalie for the U.S. Air Force, Truehl knew his experience and skill would generate collegiate interest. “I leaned on the fact that I’m a veteran,” Truehl said. “I’ve played No. 1 teams before sellout crowds. I’ve been everywhere.”

While he looked at three or four competitive colleges, a close friend suggested Quinnipiac. After a one-on-one meeting with head coach Rand Pecknold, the choice was made.

Truehl finds creative methods for dealing with his condition during games. After heavy sweating, it is not uncommon for him to change his thermal undershirt to keep from freezing.

“I don’t get to ‘cool down’ until the end of the game,” he explained.

Ice baths are out of the question, and he relies on heat and electric stimulation to mitigate soreness and injury. The economics major has his sights set firmly on a pro career. He credits his coaches and the team medical staff for their support, for helping him to adapt and helping him continue to grow as a player.

“They know I’m strong, and they don’t have to question my mental toughness or physical ability,” said Truehl. “I don’t let the pressure get to me. I give 100 percent every day, all the time. If I do my job right, I know it helps everybody else do theirs.”