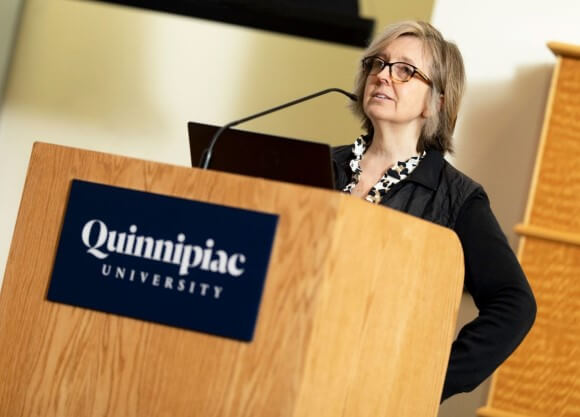 What’s better – an “impossible” burger or real beef? Owning a car or using Ubers? You’ve probably got an opinion on each — and The Tylt wants you to share them.

This social polling and opinion platform develops ideas for stories, podcasts and videos based on the information it gathers from 12 questions, or polls, it poses daily. Its executive director, Selena Roberts, explained how the site works and the theories behind its fact-gathering processes on February 13 when she spoke to School of Communications students.

The primary audience for tylt.com is people ages 18 to 34, the demographic prized for being most receptive to mobile advertising and the most active on Facebook and Twitter, where the polls can be shared via hashtags.

“That group has grown up on Twitter, Instagram and Facebook. And our questions are aimed at that audience in terms of content. We ask a lot of questions about college debt, the gig economy, climate anxiety and, yes, Lizzo and Lady Gaga,” Roberts said.

For Roberts, a journalist and author, every vote is a voice that tells a potential story. She began her career as a sportswriter for several large city newspapers and Sports Illustrated. In an article on SI.com, she revealed that Yankees third-baseman Alex Rodriguez had tested positive for steroids and later wrote “A-Rod: The Many Lives of Alex Rodriguez” in 2009. Before that, she wrote “A Necessary Spectacle: Billie Jean King, Bobby Riggs, and the Tennis Match that Leveled the Game.”

When covering the Minnesota Vikings and the Orlando Magic earlier in her career, the thriving newspapers she worked for put her up at the finest hotels. Once the industry began its financial decline in the early 2000s, she saw the proverbial writing on the wall and sought other ways to tell stories. She wrote and produced several documentaries that have appeared on Netflix and Showtime and launched a sports streaming service in 2012. But she yearned for a new challenge.

Assessing the students before her, Roberts surmised that they have grown up in a totally digital world. She told them that as the industry they hope to enter in some form evolves and transforms, “You don’t need to know what happened, you just need to know what’s next!”

Her “next” was The Tylt, which was founded in New York City in 2016 as the first product spinout from Alpha Group, a tech and media incubator inside Advance Local Media. Roberts joined it last July.

While its audience is mainly Generation Z and Millennial, “We have folks of every age answering. I vote all the time and I’m Gen X,” Roberts said. The Tylt’s polls also are syndicated to online publications, such as newspapers, which captures an older audience.

The site uses an algorithm to gather opinions in real time, allowing it to produce qualitative and quantitative insights. From this curated “on the ground” information, story ideas are hatched. Some recent examples bore these headlines: “Why are the Oscars still so darn white in 2020?” and “Is Elizabeth Warren’s campaign over?”

The data gathered can be broken down into different demographics.

“If we want to reflect the data we see in a story that is about 20-somethings — like college debt, for example — the sentiments and insights we’ll look at will center on that age group,” she said.

She said that traditional journalism often relies on group think, editors’ hunches and the same old sources to tell stories, but sometimes fails to put ears to the ground and pay attention to what ordinary people think.

The Tylt purports to redefine what it means to be a media company today, dismissing the notion of readers and consumers as passive observers.

Chris Roush, dean of the School of Communications, characterized Roberts, a college friend, as being “forward-looking while sticking to her core values as a journalist.”

Simon Hillinger ‘21, a journalism major from Stuttgart, Germany, was impressed with Roberts’ ability to adapt to a changing media landscape.

“She showed me that you can’t plan everything in your career, and you have to be open minded.” Hillinger would like to be a play-by-play soccer broadcaster.

Danielle DiMauro ’21, MS ’22, said she appreciated Roberts’ comment that the most important tool a journalist or videographer has is the quality of being curious. DiMauro is an accelerated dual-degree (3+1) student. She is a double undergraduate major in media studies and film, television and media arts, and is earning a master’s degree in interactive media and communications.

“It is their job to get to the heart of what people truly care about and not just project their own biases into their work, and to truly listen to differing opinions,” DiMauro said.