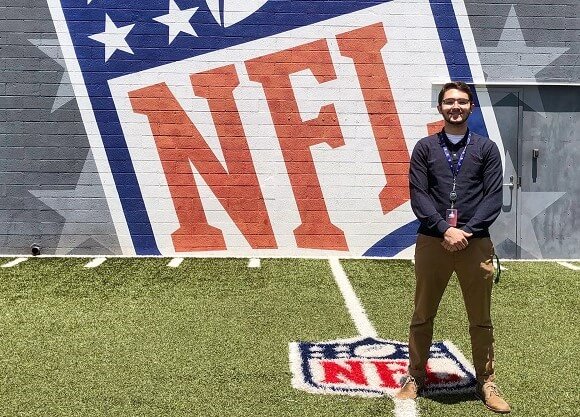 Logan Reardon ’19, MS '20, a journalism major and a sports studies minor, scored an inside look at the Super Bowl-bound Los Angeles Rams as part of his internship with the NFL Media/NFL Network this past summer.

“Being involved with the NFL was an incredible experience,” he said. “It combined my love of football with my potential future career and I was able to experience a lot of amazing things between the practices, press conferences and preseason games.”

The 3+1 accelerated dual-degree School of Communications student took part in the 7-week, 40-hour a week internship as part of Quinnipiac University in Los Angeles.

“When I was at training camp, I would work with the other NFL Network talent before practice and then watch practice and make observations for possible stories,” he said.

“After practice, we were able to get up close and personal and interview whichever players or coaches we requested for our stories. Then, I would write a story based on the day of practice and whatever that day brought. At the end of the internship, I attended a Rams preseason game against the Oakland Raiders at the L.A. Memorial Coliseum. I was able to go down on the field hours before the game and watch the players warm up before going up to the press box and watching the game. After the game, I went into the locker room and interviewed players and coaches for stories.”

Reardon said his Quinnipiac professors prepared him for the experience, saying, “A lot of the reporting, interviewing and writing side of the internship came easy to me because of things I've done in the classroom and in student media.”

“The experience changed my perspective because I was able to witness so many different things up close and personal,” he recalls.

“Just seeing how talented all these players are in person brings it to a whole new level. I was also able to see how choreographed each NFL practice and game is. Players are on such a strict schedule; it is remarkable how they're able to balance everything.”

The difficult part of the experience for Reardon will actually be during the Super Bowl.

“I will be watching the game with a few friends,” he said. “It's actually a tough situation because I am from Massachusetts so I am a life-long Patriots fan, but the Rams were my squad over the summer. I'll definitely be rooting hard for the Patriots, but losing to the Rams wouldn't hurt quite as bad.”