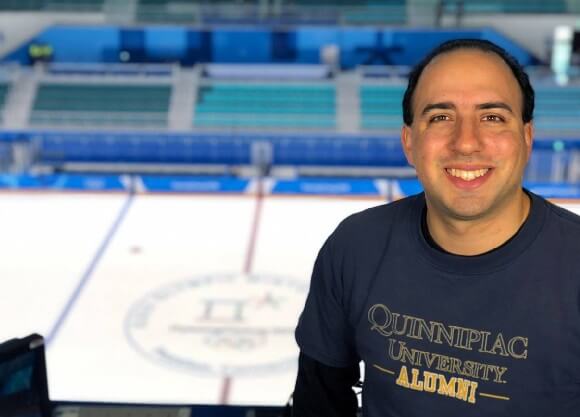 Ben Shapiro ’07 will beam the PyeongChang 2018 Olympic Winter Games closing ceremony to millions of people throughout the United States tonight for NBC.

Shapiro, who earned a bachelor’s in journalism, is broadcasting his second Olympics with the NBC broadcasting team. He focused on men’s and women’s ice hockey as well as tonight’s closing ceremony.

“To stand next to the world's best athletes in their respective sports and hear them speak candidly — on and off camera — has been really interesting,” he said. “The athletes I've been around are incredibly kind and, of course, proud to represent their countries.”

Shapiro is responsible for relaying the broadcast signals in South Korea to the studios in Stamford, Connecticut via fiber technology.

“My experience at Quinnipiac was incredible, and I'm still grateful for the time I spent there,” he said. “My professors in the School of Communications prepared me to come into the world of live sports broadcasting and step alongside veteran broadcast teams to begin my own career.”

After the Olympic Games, Shapiro will fly to Los Angeles to work on “American Ninja Warrior,” while also managing his two companies.

“The cliché really is true,” he said to current and prospective students. “Find something you love, and you'll never work a day in your life. Take nothing for granted. Don't be afraid to make changes, and when something isn't working anymore, find a way to make an adjustment that makes you happy.”