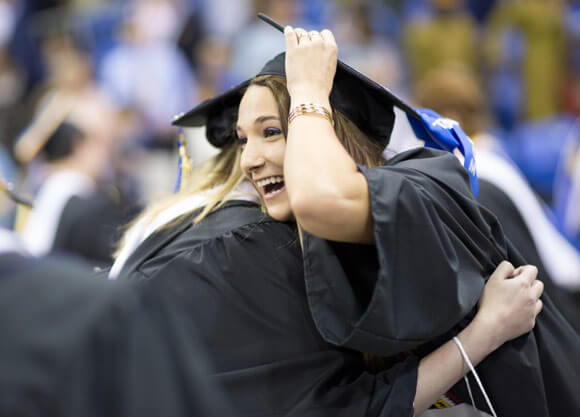 Michele Norris, whose groundbreaking work on race has been a hallmark of National Public Radio and other national media outlets, urged members of the Class of 2017 to define success in more ways than just numbers on Sunday at the Undergraduate Commencement exercises for the School of Communications at the TD Bank Sports Center.

“I want the young people who hold so much promise in their caps and gowns to know that success and excellence do not always live on the same street or occupy the same corner office — or even the same mindset,” she told graduates.

Our society’s inclination to define success by numbers starts early, she warned.

“How much candy did you get on Halloween? How many soccer games did your team win? How many badges are on your Girl Scout uniform? How many friends, or followers, or likes have you amassed on Facebook, or as my mother calls it, the Twitter,” she said. “It continues into college with grades and internships and measures of popularity — and continues into adulthood with salaries and promotions and the cost of one’s home or car or vacation.”

Norris said she wishes success for everyone — but implored the graduates to contemplate what that success means to them.

"My great hope for the Class of 2017 is that you think long and hard about how you measure success and you understand the satisfaction, the self-confidence and the self-worth that comes from the pursuit of excellence on one's own terms," she told the School of Communications graduates.

"Excellence may take you to dizzying heights — but also allows all of us to flourish where we are, to bloom where we are planted and to find our personal best despite our means, our challenges, our restrictions and our relative gifts."

“If you want to conquer the world, you have to understand it,” she said. “The concern is that we are losing the ability to actively listen and therefore to engage in deep and meaningful conversation, that as we pull deeper inside ourselves with our headphones and personal devices and timelines full of people we choose to ‘like’ or to ‘follow,’ we put less of a premium on engagement with people we might not like or don’t want to follow.”

"I am here to tell you if you love what you do and work hard and are willing to take a risk or two and uphold the ideals of your chosen fields, you will stand out," said Keteyian, a contributing "60 Minutes" correspondent.

Keteyian is best known for his investigations for CBS News and “60 Minutes Sports” exposing corruption at the highest levels of athletics, including the Olympics, the National Collegiate Athletic Association and the National Football League.

He urged graduates to be willing to take a risk, while always remembering to stay true to a strong work ethic.

"Integrity is the most important thing," Keteyian said. "As I see it the one thing you have control of your life is your name. If people don’t trust you, they don’t talk to you in my business."

Melanie Afua Nyarko '17 told her fellow graduates they are well-positioned for success.

“For many of us, the new act in this play called life will be graduate school," she said. "For many others, this new act will be starting a fancy new job doing everything you’ve ever dreamed of. Others will be taking a year to explore the world outside of Quinnipiac and Connecticut. And some will be doing independent research and work. Even if you don’t know yet, that’s OK because Quinnipiac’s School of Communications — the advisers, the deans and our professors — has prepared you for whatever you will do when the time comes."

We will confer 1,709 bachelor’s degrees this weekend across six schools and colleges — Arts and Sciences, Business, Communications, Engineering, Health Sciences, and Nursing.