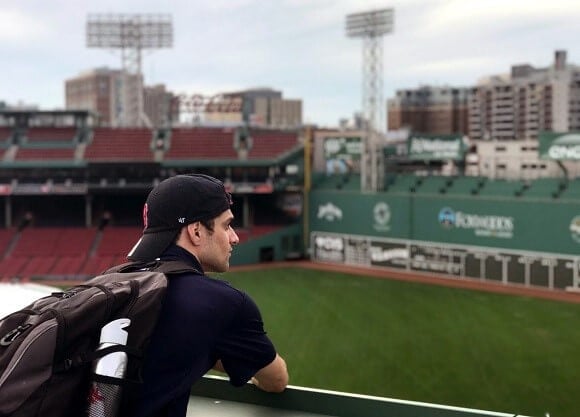 Paul Caracciolo ’18, MS ’19 is making a World Series run with the winningest team in baseball this season, the Boston Red Sox.

The graduate student currently works on the fan and youth engagement team for the Red Sox, interacting with some of the youngest fans in baseball and giving them unforgettable experiences at Fenway Park in Boston, all while pursuing his master’s degree in public relations.

While all-star Red Sox players such as Mookie Betts and J.D. Martinez prepare for the start of the 2018 World Series on October 23, Caracciolo has worked tirelessly to create lifelong Red Sox fans and positive game-day experiences through user-friendly apps, virtual-reality games, prizes and contests.

“It’s our job to make the kids happy and enhance their experience which, in turn, really helps the parents out," Caracciolo said.

“We strive to make Fenway more fun than it already is — and when that's the case, it’s a win-win for everyone involved."

He has tapped into his extensive experiences in the classroom and in student media at Quinnipiac.

Caracciolo has been heavily involved in sports media organizations, including Q30 Television and the Association for Women in Sports Media, as well as Quinnipiac University in Los Angeles.

“This job is different every day and fans present different challenges. It’s important to be ready for anything,” he said. “At Quinnipiac, I gained leadership skills and critical thinking skills that contribute to my ability to problem solve on the fly.”

Caracciolo hopes that earning his master’s in public relations at Quinnipiac will one day land him a front-office job with a professional sports team. But for now, he’s enjoying his time being a part of history, saying, “My office is Fenway Park. You can't beat that, you really can’t.”