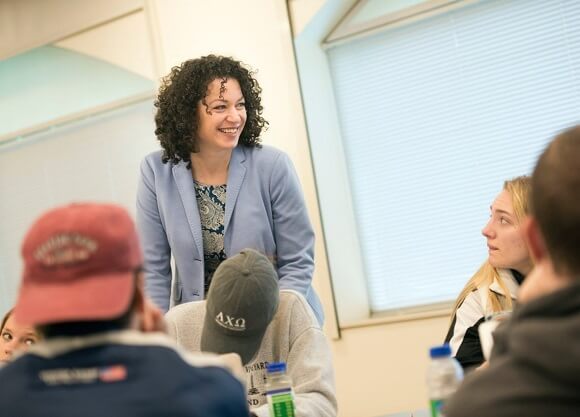 Tennis was Antoaneta Vanc's first love, but her professional career was cut short by injury. Vanc, associate professor of strategic communication, never imagined that education would be her vocation.

"You don't know what path your life is going to take," she said.

Vanc's trail led to Quinnipiac, where she was recognized with the university's most prestigious academic honor, the Excellence in Teaching Award in 2015.

"It's still surreal," Vanc said. "It is the highest teaching honor that someone can receive. When I was a tennis pro, I never thought that I would be a professor. I was actually exempt from going to school. Now, I'm going to school every day and being tested every day by our students."

Vanc grew up in communist Romania. She was a national tennis champion, playing singles, doubles and mixed doubles.

Athletic prowess runs in Vanc's family. Her father was an accomplished water polo and handball player, her mother was a standout fencer and her sister, Andreea, won two World Tennis Association doubles titles and advanced to the third round of both the 2005 Australian Open and the 2005 French Open.

The fact that Vanc was able to play any sport is quite remarkable. She was born with inwardly-turned feet and doctors predicted she might never walk. Her father, however, pushed her to overcome the obstacle by making her follow a strict regimen that included exercise and walking on her toes to strengthen her legs and feet. By age 5, Vanc was playing tennis.

"Tennis played an important part in my life," she said. "I started playing tennis to fix my body. I got so good."

She was so good that she won national titles and was ranked in the top five in Romania. But Vanc's dreams of playing tennis on the world stage were dashed when an injury forced her to retire.

Vanc then moved from the tennis court to the field of public relations.

She earned a bachelor's degree in journalism and political science from Banatul University in Romania and worked as a public relations and communication officer for Sport Vanc and as director of the Office of Public Relations and Communication for the Romanian Presidential and Parliamentary Electoral Campaign. She also served as an investigative reporter for Romanian National Television before moving in 2001 to the United States.

Vanc was teaching international communication at Tennessee when she met Kathy Fitzpatrick, a former Quinnipiac public relations faculty member, at a conference. They clicked and Vanc applied to Quinnipiac. She was hired in 2009 and has since been granted tenure.

"To be a professor is the best thing I could've done with my life," she said. "We are molding minds. That is a huge responsibility. As I grow older, I realize that just as much as students learn from us, we learn from them."

"I felt truly, completely helpless, but I couldn't let my town fall apart," she said. "I decided to do something about it."

Nemeth and friends organized the Strides for Sandy Hook 5K memorial run. She drew upon experience from Vanc's classroom to promote the event, which was a huge success.

"Our original plan to get Newtown involved to keep the spirit of Sandy Hook alive attracted supporters from across the country," Nemeth said. "Had it not been for your campaigns and preparation, I would not be able to handle this role. It was extremely overwhelming, but relieving to have something to throw myself into and know I'm helping the community somehow. I just wanted to express how grateful I am to have had you as a teacher."

"All I do is give students guidance and introduce them to everything someone in public relations does," she said. "It's remarkable to see students create something from the knowledge they accumulate in the classroom."

Vanc, who enjoys painting, gardening, photography and traveling with her husband, Costel Calin, said she never thinks about the what-ifs of her tennis career.

"This is the perfect place to continue working with students doing what I love," she said. "I believe we have the most perfect department on campus, with the smartest students and the greatest colleagues."