From classroom to campaign trail 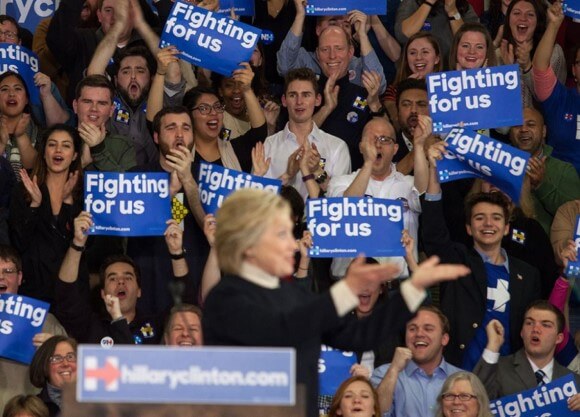 Every four years, Scott McLean's political science students get to step out of the classroom and onto the campaign trail in New Hampshire for the first-in-the-nation primary.

McLean, a professor of political science, has been taking his students to the Manchester primary ever since the 2000 presidential cycle, when Sen. John McCain and Vice President Al Gore came out on top.

"Every hour of experience in New Hampshire, observing and serving in a presidential campaign, is a significant learning opportunity that can have enduring effects and impart real experiences of communication, leadership and civic engagement," said McLean. "These are transferable skills that will endure throughout their lives."

The students made the Manchester trip as part of McLean's four-credit, experiential course titled Presidential Campaigns. They worked for the candidate of their choice. This year's class split into three groups to campaign for Hillary Clinton, Bernie Sanders and Marco Rubio. They made two separate trips to New Hampshire during the fall semester, once in November to get on-the-ground training from campaign managers and again in January 2016 to fine-tune their skills in anticipation for the last push before the February primary.

"I think the class in general allowed me to understand the political system more than I did before," said Michael Raimondo ’18, a political science major and Rubio supporter. "And the actual fieldwork definitely allowed me to open up, get out and speak my mind now that I'm more educated on the issues."

Some students got an up-close and personal look at two very different rallies held on the snowy Monday before the primary.

"Imagine" was Clinton's mantra throughout her speech—she urged the crowd to imagine the United States getting back to creating more small businesses, to imagine the country raising the minimum wage so people and their children can get ahead, and to imagine women finally getting equal pay in the workplace.

Shouts of "Yes!" repeatedly punctured the air in response, reminiscent of parishioners caught up in the spell of a fiery sermon.

"And to all of the young people who are supporting me, thank you from the bottom of my heart," she said.

Clinton might as well have been talking straight to the group of Quinnipiac students sitting stage left, mere feet away from Chelsea, Bill and Hillary.

"It was amazing," said Tim Quinn ’17, a political science and economics double major and Clinton supporter. "I always wanted to meet them all together, and it was just what I imagined. It was a lot more rowdy than you'd expect because there was a lot of energy here. You don't really get to experience that watching TV. Right here you're in the middle of it, and you can feel it."

Several hours later and three miles south on I-293, Donald Trump held court at the Verizon Wireless Arena, home of the Manchester Monarchs minor league hockey team and host to such upcoming events as a Larry the Cable Guy stand-up comedy show, a Barry Manilow concert and a Monster Jam truck rally.

Murphy Siegel ’18, a political science major, joined several of his classmates at the rally, sitting a few rows back from the left of the stage. Some of the students, including Siegel, decided to sport some Trump swag and take in the rally as that night's entertainment.

While Clinton may have invoked the title of John Lennon's best-selling single earlier in the day, The Donald chose The Beatles' "Revolution" for his entrance. He was clear with his immigration policy regarding Mexico, and his solution was concrete: build a wall.

"And we're not talking about small walls," he said. "I'm talking about big walls—Trump walls." The crowd responded with a resounding "U-S-A!" chant.

Christopher Bird ’16, a political science major and Rubio supporter, said he was ambivalent toward Trump.

"I think what he's doing for politics in this country is a good thing, in some ways," he said. "He's generating voter turnout, he's firing up the base and he's getting people interested. I think that's always a good thing. Even if he is doing it with rhetoric I don't really approve of, at least he's getting people involved in the political process."

"Every hour of experience in New Hampshire, observing and serving in a presidential campaign, is a significant learning opportunity that can have enduring effects and impart real experiences of communication, leadership and civic engagement. These are transferable skills that will endure throughout their lives." said Scott McLean, professor of political science in the College of Arts & Sciences