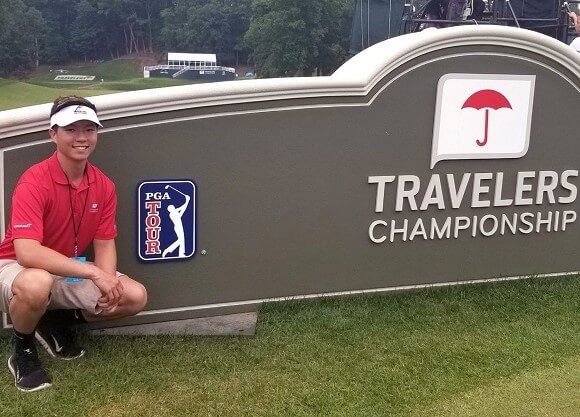 James Burnham ’19 made such a great impression as an intern at Travelers Insurance last summer that he will return to the insurance giant after he graduates to begin his career.

The economics and philosophy double major credits his education and leadership opportunities at Quinnipiac with setting the stage for the competitive job offer at the second largest writer of commercial property casualty insurance in the United States.

“You can only go so far by going to class,” Burnham said. “You have to challenge yourself and elevate yourself. Quinnipiac gives you the chance to do that with access to great professors, all kinds of clubs and activities and the opportunity to pursue what excites and interests you.”

In addition to his work in class, Burnham has served as president of Beta Theta Pi fraternity and president of the interfraternity council. He’s also been active in Quinnipiac Christian Fellowship and InterVarsity, including on a 2017 service trip to Houston to help rebuild flood-damaged homes after Hurricane Harvey.

Burnham said that his decision to study both economics and philosophy was not a coincidence.

“In the 21st century, they go hand-in-hand,” he explained. “They give you the complementary skills to think critically and analytically.”

Burnham credits Professor Donn Johnson, his academic adviser and chair of economics, for helping to make the introduction to Travelers. Burnham was ready to apply some of the lessons he had learned from Johnson and other professors.

“He’s always been a top, very enthusiastic student since day one,” Johnson said. “He’s bright. He’s a thinker. He’s a problem-solver and he always wants to learn.”

As a freshman, Burnham arrived at Quinnipiac as an economics major with several Advanced Placement credits already on his transcript. He enjoyed learning about the impact and role of economics in high school. He wanted to learn even more about it in college.

“The numbers, the graphs, it all makes sense to me. Plus, it’s a versatile degree,” Burnham said. “Because I’m in the College of Arts and Sciences, I’m open to different ways of thinking and a multitude of careers.”

It wasn’t until his junior year, with a chance to pursue a double major, that Burnham found an opportunity to explore philosophy — from Aristotle and Socrates to the more contemporary issues of the modern world.

“It’s not just the philosophy that interests me,” Burnham said. “It’s the public speaking and the history. It’s being able to read high-level literature and articulate my thoughts more effectively.”

All of these skills — his economic literacy and the ability to make numbers meaningful, his joy of philosophy and a fluency in profound and provocative thinking — made him the ideal choice for a project management internship at Travelers.

What’s more, Burnham added, his direct manager and many other employees at Travelers are Quinnipiac alumni. A powerful alumni network was already in place for him.

“It was an incredible experience. I worked in personal insurance for operations in California,” said Burnham, whose senior thesis addresses business ethics and social responsibility.

“Working in project management, we’re all responsible for returning shareholder equity, hitting our profit targets and expanding the business throughout different regions.”

But if Burnham needed validation that his academic background was well suited for Travelers, he found it higher up the corporate ladder.

“The vice president of my region was an astrophysics major and a philosophy of science major in college,” Burnham said. “To me, that was one of the moments where I realized this is a company that values intellect and your capabilities as a thinker — people like me.”