Your learning begins in the classroom. Your growth as a student and an individual continues outside of it. The College of Arts and Sciences is a movable hub where individuals from all academic groups converge. You’ll live and work in a community of other students who might share your interests and values, but also offer different ideas and perspectives.
Apply Request Info Visit

Find your roots — and expand them

Whether you live on campus or off, you’ll also have the opportunity to participate in numerous organizations and events alongside students of different academic programs and various backgrounds. These include annual university-wide writing competitions, humanitarian service trips, the mock trial competitions, Nobel Peace Laureate Summit and the Interdisciplinary Program for Research and Scholarship (QUIP-RS). Our Alternative Spring Break service trips provides you with opportunities to expand your experience with other cultures and become a more engaged and enlightened global citizen.

Experience A Day in the Life

Whether you want to expand your perspective globally, make an impact locally, or put what you’ve learned in the classroom to use out in the real world, Quinnipiac affords you endless opportunities to make your mark. Experience what it’s like to be a Bobcat in our “A Day in the Life” video series.

The College of Arts and Sciences at Quinnipiac is a national leader in preparing graduates to take on the challenges of civic leadership in the 21st century. Students in our signature civic leadership program work to enhance social justice, build communities and become agents of change through activities on and off campus.

Partaking in this program positions you to thrive in careers that span government, media, law, business, healthcare, nonprofit, social services and more. You'll have the opportunity to engage with these opportunities while pursuing any major in the College of Arts and Sciences.

Places to grow, explore and connect

Your growth as a student at Quinnipiac occurs as much outside the classroom or laboratory as it does inside. Quinnipiac offers more than 150 student-led groups and organizations dedicated to academic excellence, literary and performing arts, social awareness, community engagement, student government and beyond.

Each student-led group gives you the chance to explore your interests more deeply, expand your skill set and join communities of equally talented and enthusiastic individuals. If a group that speaks to your particular interests and convictions doesn’t exist yet, we encourage you to work with Student Life to develop and launch it.Whatever groups you choose to become a part of, the kinds of social and professional connections you’ll make during your experience will help you long after you’ve graduated.

Our Living-Learning Communities offer the opportunity for first-year students to live and engage in a community of like-minded peers. Bolstered by mentorship from faculty and staff, these communities provide a strong foundation for students to develop — both academically and personally — into professionals, leaders, citizens and lifelong learners.

The eSports Arena LLC is for students interested in competitive gaming. Students can compete against other schools as part of the QU eSports team, participate in open tournaments, attempt to set records in speedrunning or stream their incredible gameplay as they live, share strategies and cheer on peers also striving for the pinnacle of gaming skill. Popular or obscure, single-player or team-oriented, all games and all players wanting to amplify their abilities and reach are welcome!

The Law and Legal Systems LLC is for students interested in becoming lawyers, police officers and correction officers as well as students interested in government policy, policing, corrections, restorative justice and improving the legal system. This community brings together diverse ideologies and perspectives for productive, respectful conversations about issues related to law and legal systems. 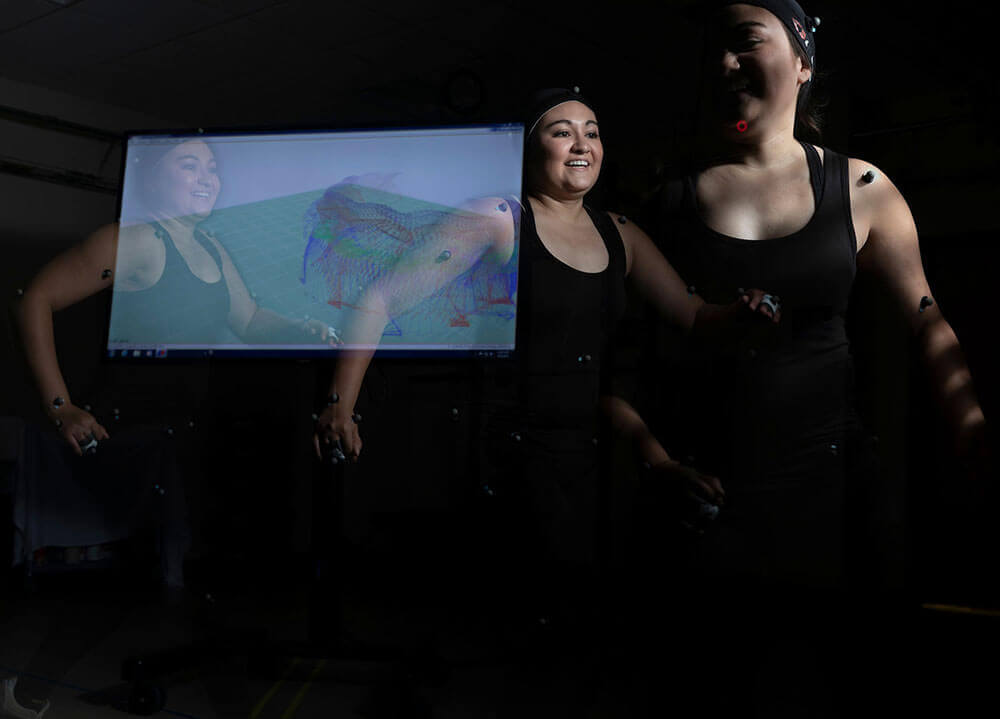 Even at 14 years old, Katie Rosell ’20 was ready to leave her mark in the video game world. All you had to do was watch her play. She owned Nintendo 64 the way Super Mario owned the best mustache.

She jumped. She ran. She saved the day. But still, something was missing.

“I started to realize, ‘Wow, I like playing games, but wouldn’t it be even more fun to make my own games?’ It just kind of hit me,” said Rosell, a game design and development major with a concentration in art and a minor in computer science.

But there was more to it than that. “Grand Theft Auto,” “Call of Duty,” the games with the big budgets and the big development teams had male protagonists.

So Rosell set out to leave her mark at her first game design camp in 2012 in suburban Boston.

“I walked into the room the first day,” Rosell said, “and I was the only girl among 38 guys — and they were all older than me.”

Today, Rosell is making her own games and working collaboratively to build more sophisticated projects. She is among the most talented artists in the GDD program and animates her characters by hand as well as with motion capture and 3-D modeling.

In the Motion Analysis Laboratory on the North Haven Campus, Rosell learned how to give life to her characters, including a fisherman. Rosell wore a special motion capture suit with sensors and pretended she was fishing — casting the line, reeling in a fish. Again and again.

The computer picked up her movements and compiled the data as 3-D modeling. Suddenly, her digital fisherman had scored the catch of the day.

“I’ve found that people see what you’re good at. Your talent speaks for itself,” Rosell said. “I just want to keep building my portfolio and getting better.”

“In my major, I’ve never encountered people who’ve said, ‘Oh, she’s a girl. She can’t do this.’ I’ve never felt that vibe here,” said Rosell, whose older sister, Erika Rosell, earned her MBA from Quinnipiac in May. “It’s always just been, ‘Are you experienced enough to tackle this problem?’ That’s how the program works — and I love that so much."

We're always here to help provide additional information and answer any questions you may have.

Keep up to date with the latest information about the College of Arts and Sciences.